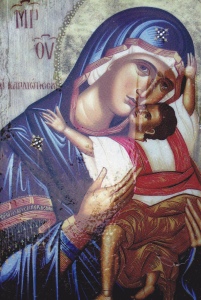 A friend told me about an icon with myrrh streaming* to be shared at a local Greek Orthodox church at 8 a.m on Saturday. She explained that they first have a religious service, then share the oil.

I didn’t hesitate to put it in my calendar.

Never having been to a Greek Orthodox service, or even heard of “myrrh-streaming,” I did not know what to expect, how to act or dress or anything. But I walked through the door and the kind demeanor of the nice young man selling candles in the entry hall immediately made me comfortable.

I entered the church and took stock. Most people were standing. The pews were arranged two deep around the perimeter of the room. Each one accommodated 5-6 adults and there were maybe 20 of them in total. Not a lot of seating so I’d better grab one now. I sat at the end of a pew in the back nearest the door.

The main sound was the harmony of three men beautifully singing praises. I tried to lose myself in their music, but I felt restless inside and couldn’t seem to ground myself. So I decided to look around and learn.

Compared to the churches and synagogues I am used to, this church was small. It had a high ceiling with wooden beams, icons on the wall and on stands, and tall narrow windows, feeling a bit like a modern European church. In the front of the room stood an ornate wall with a door in the center, through which priests would periodically walk. When I caught a peek through it, I could see movement and action behind the wall as if they were performing the religious rituals of the service, but I guess it wasn’t meant for the congregation to overtly witness.

Down the center of the room formed a line of people, delineated on either side with red velvet ropes. In front of the line was an icon on a stand, though I didn’t know if it was “the” icon that we had come to see. When people reached the front of the line, they would bow (some would kneel or throw themselves on the floor), and then, after a moment or two, stand close to the icon and appear to kiss it. (I later learned they generally were not kissing the icon but smelling the scent of the oil.)

I noticed that whenever the name of Jesus or the Holy Spirit was mentioned, everyone made the Sign of the Cross, and that it was “backwards” from the way I was taught. Also, when they did it, they held their fingers in a particular pointed way. To be respectful, I tried to imitate their form and practice, though I didn’t keep up with all the crossing.

Over time, the room slowly filled, and about 45 minutes after I arrived, a grandmother (age 82), her daughter (around my age) and her teenage granddaughter caught my eye. It looked like the daughter was searching for a seat for her mother. I motioned to the daughter that they could sit with me, and they did.

After awhile I started talking with daughter, who asked me lots of questions like, “What is the line for?” and “Do you know what is going on here?” I learned that they were Catholic, her mother was recently diagnosed with stage 4 esophageal cancer, and they drove for two hours to come here. I learned that they were Italian and her mother is from Italy, not far from where my mother is from.

I shared that I also was diagnosed with stage 4 cancer, and because I was having a really great-feeling day and I had lots of energy, she looked shocked. (That is always gratifying, that I can still pull off looking normal!) We talked about Dana Farber and treatments and faith.

“My mother’s faith is rock solid.” We looked over at her mother, deep in prayer. She poked at her mom.

“She prays all the time. If I want to talk with her, I have to interrupt her.”

We laughed and she continued to talk to me.

“Since she was diagnosed, I have to say that I grew away from my faith,” she said. “It just doesn’t feel like there is anything for me there.”

I can relate to that. I’ve been in that place. I knew that she would find her own way out, and we talked a little about it. My position (which I shared with her) is that it doesn’t matter if you can feel it – God and all kinds of spirit beings are around you and ready to support you the moment you ask for it.

“I know they are there, even if you aren’t feeling it,” I told her. “Whatever you do is okay.”

She stopped and looked at me. “I think that you are why I was meant to come here.”

We chatted off and on during the service (which was over three hours long!). We learned that the line was to see and touch “the” icon, so we eventually joined the line. She shared that she had high anxiety about what to do when she got to the icon (not unusual), so I told her to follow me and just do what I do. (I’ve been in enough of these situations, and have been observing behaviors in this room for almost three hours, so I felt comfortable.) Once I reached the icon, I found myself praying for her mother and had to remind myself to pray for me too! I did get to see and smell the oil.

At the end of the service, we joined the line for the final blessing from the priest. As we waited for our turn, the grandmother said to her daughter, “Go light a candle for me.”

We finally reached the head of the line, where the priest rubbed the oil on our forehead and palms. Blessed, we parted ways.

May your day be filled with blessings and love, and a lingering, beautiful scent,
Marie

*For a description of myrrh streaming, you can check out this article. The icon we visited was the one from St. George’s in Tyler, PA – if you want, just skim down to the point in the article to learn more about it. They describe the service as 40 minutes – I don’t know why ours was so long.

1 thought on “Icon with myrrh streaming”